Bits and pieces about what's going on in our garden right now.

It's gardening season again!  Not that there's much for me to do, except keep the flats that I'm starting seeds in warm, sunlit and watered.  The bulbs are coming up quite happily on their own. 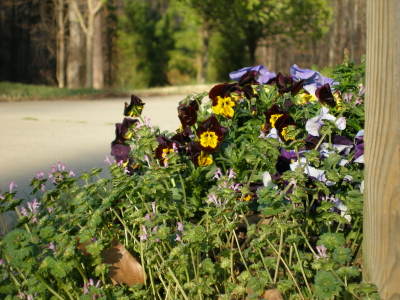 The pansies are also blooming quite wonderfully.  These are in the bed that surrounds the mailbox.  Around this bed, henbit is coming up profusely - you can see it best to the left of the pansies.  It's the little purple flowers.  I keep it out of the beds since it will out-compete the pansies, but I'm glad to have it in the yard.

The first house we rented had a wonderful yard.  It had bluets, gill-over-the-ground, veronica, henbit, field pansies, mock strawberries, chickweed and bittercress.  Oh, and it also had grass which makes for a good background. 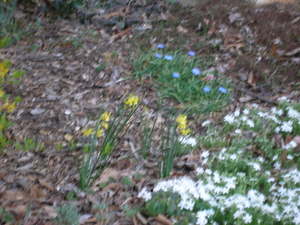 This is the bed in the back of the backyard.  Most perennials and annuals don't do all that well in it because of the large tulip tree right behind it.  So, next fall, we're going to fill it up with bulbs which seem to do just fine.  Here we have some very small, cute daffodils, iphaeon, and creeping phlox.

We have large trees next to other raised beds in the yard so, when we put those beds in, we lined the bottoms with plastic in order to keep the tree roots out.  But the tulip tree is the most beautiful tree in the yard (well, except for the dogwoods) so we didn't line any of the beds next to it.  The 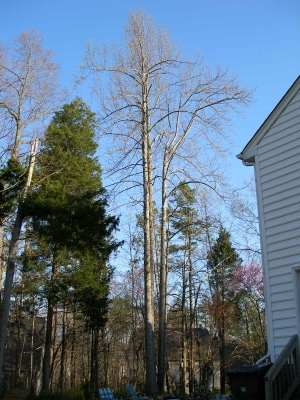 tulip tree gets all the water it wants.

Here's the tulip tree (about 70 feet high).  When we had the house built, we told them if they damaged this tree, we weren't buying.  They had so much orange ribbon and paint around and on it!  Even then, there was a small gouge in the trunk, but it healed over quickly (for a tree).

We do occasionally look at it and think that if we had a large hurricane come through, there goes the stairwell and the back bedrooms.  But we'll chance it. 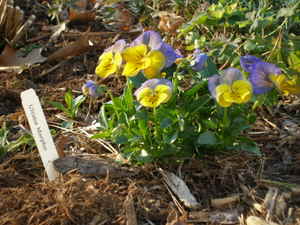 There are also many lovely cedars in our yard as you can see to the left of the tulip tree.  They had to cut some of them down to put the house in, but we had them push the trunks to the back of the yard, and we've cut them up and used them to outline some of the raised beds.

This is my current favorite pansy color.  I've put these in all of the most prominent spots in the yard (along with dozens of other pansies too). 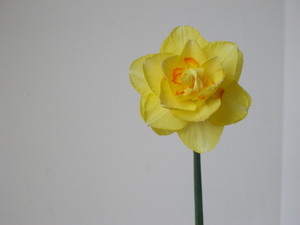 This is my current favorite daffodil-type flower.  It's a double jonquil, called "Tahiti."  This is one of the best ones that has bloomed in our yard. 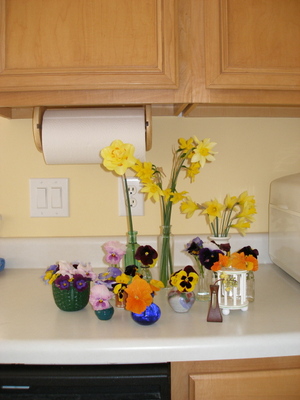 My younger son and I filled some vases for the house yesterday morning.  I did the daffodils, and he did the pansies.  I particularly like his arrangement in the front with the orange pansies in the deep blue vase.

This is our thuja bush.  It doesn't have an obvious bloom, but it doesn't need to - it's just round and cute on its own.  We had one at the edge of our previous house, and I wanted to move it when we were moving here.  My husband said that it was a major plant and we shouldn't move it.  I said that we could just put a large daylily in its place after we dug it up and potted it.  The daylily looked just fine.

We planted the moved thuja in the same place as this one, but it broke off in an ice storm a few years ago (those of you who live in central NC know which ice storm I mean).  We replaced it with this one.