One of the fun things about our family configuration is that we have children in three very different stages – one finishing high school, one finishing middle school, and one just learning to read in 1st grade. We have all sorts of things going on! But, that is also one of the most challenging things about our family configuration – particularly with the seven/eleven year gap between the youngest one and his older siblings.

This gap particularly shows itself when we go to museums or historical sites. While the older two are reading and discussing everything there, the younger one looks around a bit and then gets bouncy. With this in mind, my husband and I settled on a “divide and conquer” approach to the Smithsonian museums on our trip.

The major place we had to really split up was for the National Gallery. My husband majored in art and philosophy so going to an art museum with him is like going to an art history lecture. An interesting and talkative one <grin>! The older two enjoy discussing art with him, but the youngest one gets bored with their conversation almost immediately. So, the first day the three of them went to the National Gallery, younger son and I went to the Air and Space Museum. For techno-boy, who loves building things and started taking toys apart around the time he learned to sit up (it was weird!), the Air and Space Museum was just right. We went through at his speed – I told him that I was just following him. This made him very happy since, as the youngest, he often gets dragged to various places.

We ended up spending a lot of time in the aircraft carrier rooms – discussing almost every display in detail. They have a mockup of a flight deck as if you were actually standing on one and also a mockup of a control room. We went to see the (retired) battleship, U.S.S. North Carolina, in Wilmington a year ago, and I was somewhat surprised at how much he had remembered and could apply to this exhibit. He was also fascinated by this scale model of the carrier, U.S.S. Enterprise. 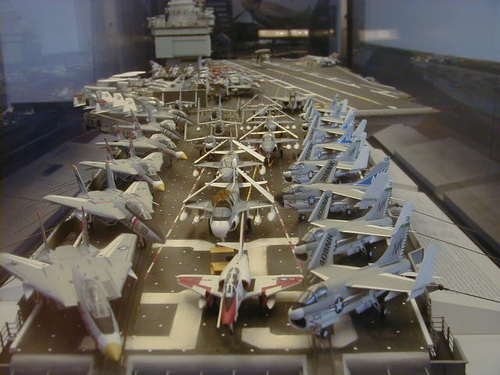 The next day, while the other three went to the modern wing of the National Gallery while younger son and I went to the older wing. This was more tricky for me because there I did have some things I really wanted to see – and younger son’s approach to this museum was to walk in a room, look around, then announce to me that he had scanned the room and was ready to go to the next one. Some rooms I only got to scan too, but there were some, particularly the Impressionist rooms and the Hudson River School section, that I wanted to look at in some detail.

This is where the map came in very handy. Techno-boy loves maps and figuring them out. The National Gallery map became his quite quickly. I would sit him on the couch in the middle of a room so that he could figure out where we were and what rooms were nearby, and then I would have some time to look at the paintings. I just had to keep checking on him, because he’d get up and wander to the doorway where the room number sign was – while looking at the map and almost crashing into people. I would have to gently guide him back to the couch, reiterating that he needs to close up the map before he goes strolling!

Here are two of my favorite paintings there. 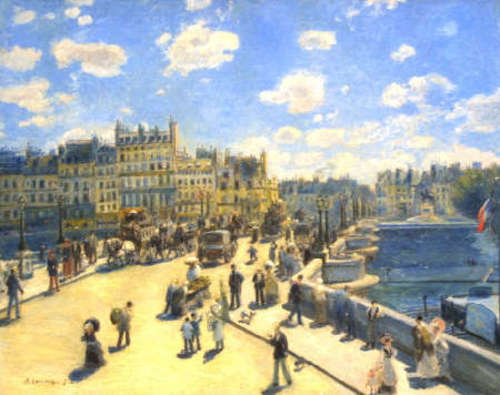 Pont Neuf by Renoir (from our French study, we know that the Pont Neuf (the new bridge) in Paris is about 500 years old). Renoir is one of my favorite painters, and we were lucky enough many years ago to be able to see a fairly thorough exhibit of his paintings in Paris. 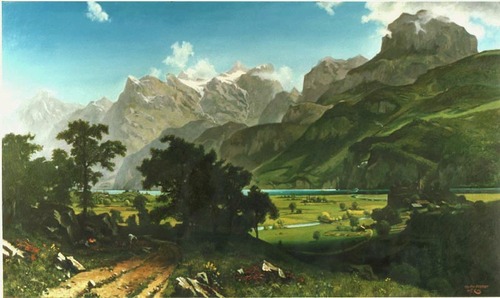 Lake Lucerne by Bierstadt. I’ve always loved the Hudson River School of Painters, and Bierstadt is one of my favorites. I stood for a long time in front of this painting because, like many of his, the more you look, the more you see (younger son even looked for awhile too). You can’t see much detail in this painting – the original one almost covers the wall of the room. 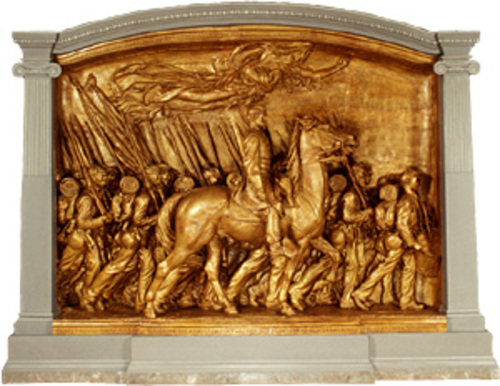 We also talked for a good while about the Shaw Memorial. I’ve seen the original bronze memorial on Boston Common, and the National Gallery also has a plaster version. The Shaw Memorial was sculpted by Augustus Saint-Gauden to honor members of the Massachusetts Fifty-fourth Regiment in the Civil War – one of the first African-American troops in the Civil War. It included two of Frederick Douglass’s sons, a grandson of Sojourner Truth’s and William H. Carney, the first African-American to win the Medal of Honor.  Colonel Robert Gould Shaw led the regiment. One third of them, including Shaw, died in an attack on Fort Wagner in Charleston. For more information, including details of the monument, click here.   There’s also an excellent website telling the story of the regiment here which I highly recommend reading.  It includes this part of the story:

The fear many Black volunteers had about the potential racism of White officers and colonels was calmed when Massachusetts Governor John Andrew assured Bostonians that White officers assigned to the 54th Regiment would be "young men of military experience, of firm anti-slavery principles, ambitious, superior to a vulgar contempt for color, and having faith in the capacity of colored men for military service."

Although the Confederates won the battle, as the second website said:

...the assault on Fort Wagner proved to the nation and the world the valor of Black soldiers in general and the men of the 54th Regiment in particular. From the ranks of the fifty-forth came stories of unfailing patriotism and undying glory.

We reversed roles in the Natural History and History museums – my husband went through with younger son, particularly focusing on the transportation and war exhibits (more machinery!) with younger son while I lingered in various exhibits with the older two – particularly in the early ocean exhibit with my daughter who wants to go into marine biology. The insect zoo, however, as fun as it was for entomologically minded older son, had very little new for any of us to learn since we spend so much time at the arthropod zoo at the science museum in Raleigh.

The next time we go back (and there definitely will be a next time!), we’re going to go to the Udvar-Hazy wing of the Air and Space museum. It’s out at Dulles airport, and it has all of the things that are too big for the museum on the mall – like a Concorde and the space shuttle, Enterprise.