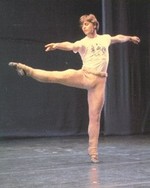 I was looking for a quote about Fred Astaire by Mikhail Baryshnikov, and I came across this interesting interview with Baryshnikov from a few years ago:  Larry King Baryshnikov transcript.  It includes Baryshnikov's memories of growing up in, and escaping, the Soviet Union, being famous in America, why he stopped making movies, and growing older as a dancer. 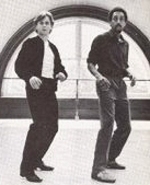 We recently watched White Nights again, a cold war era drama with Baryshnikov and Gregory Hines. The dancing is wonderful, of course, but I also enjoy the interactions between the two main characters.  This is no buddy movie - they can't stand each other (I'll eventually write about Gregory Hines - I love his dancing too).

Here's another interesting article about Fred Astaire and other dancer's reactions to him:

No one ever better fit Fred Astaire in the dancer's scheme of things than Mikhail Baryshnikov, opening the tribute on the occasion of the American Film Institute's Life Achievement Award in 1981:

"I have been invited to say something about how dancers feel about Fred Astaire," Baryshnikov said. "It's no secret. We hate him.

"He gives us complexes, because he's too perfect. His perfection is an absurdity that's hard to face." Classical dancers could deal with legendary rivals from the past, such as Nijinsky, because their accomplishments were known from books and from photographs that don't move, Baryshnikov said. With Astaire it was another story:

"The problem with Astaire is that he's everywhere -- moving. You know, you give your own performance and receive applause and you think maybe, just maybe, it was successful, and you go home ... and turn on the television to relax and there he is. Making you feel nervous all over again.

...
Edward Villella once called Astaire "the personification of neo-classicism within a popular American art form." Margot Fonteyn spoke of Astaire's "magic of magic," which made "dancing look easier than walking, more natural than breathing."

In his recent, wonderfully comprehensive "Astaire Dancing: The Musical Films," John Mueller recalls George Balanchine (who shared the first round of Kennedy Center Honors in 1978 with Astaire, as well as Marian Anderson, Richard Rodgers and Artur Rubinstein) saying of Astaire:

"He is terribly rare. He is like Bach, who in his time had a great concentration of ability, essence, knowledge, a spread of music. Astaire has that same concentration of genius; there is so much of the dance in him that it has been distilled."

Mueller also tells an anecdote about Jerome Robbins, whose 1983 ballet "I'm Old-Fashioned" actually incorporates film footage of Astaire dancing (with Rita Hayworth) in its staging. During a trip to the Soviet Union, a reporter asked Robbins to name the dancer who influenced him the most. "Oh, well, Fred Astaire," Robbins replied. The journalist looked very surprised, so Robbins asked what the matter was. The reply: "Mr. Balanchine just said the same thing." 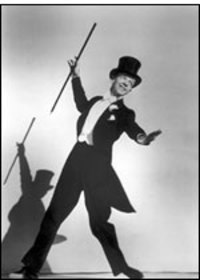 When googling, the most common quote of Baryshnikov's about Astaire is:

"No dancer can watch Fred Astaire and not know that we all should have been in another business."

I never could find the quote I was looking for, but here's another interesting quote from Educom:

As for Fred Astaire's dancing, both George Balanchine and Mikhail Baryshnikov called him the greatest, most original dancer of all time.      A perfectionist, Astaire was uninterested in the advice of others, and wrote in his autobiography:      "I believe that if you have something in mind in the way of creation, you are certain to come up with inaccurate criticism and damaging if you go around asking for opinions. It is the easiest thing in the world to become discouraged by a well-meant suggestions which may throw you off your original train of thought."      The perfectionism paid off.  Movie director Rouben Mamoulian said, "Fred Astaire makes it look easy by only taking the greatest of pains.  He works harder than any newcomer.  He never lets up.  You'd think his entire life and future depended on the outcome of each dance. He keeps at the top because he does the impossible -- he improves on perfection."

This was featured in Tarhell Tavern #59. URL:

OK, it didn't accept the url.

I adored Fred Astaire. Baryshnikov is right Fred was the ultimate in dancing. How I wish i could have danced with him. There will never be another Fred Astaire no matter how hard they try. When he died it was a great loss for dancing.

Baryshnikov is too humble. Fred Astaire may have been good at what he did, but he could never have done what Baryshnikov could do. Those leaps, turns, jumps - Baryshnikov was a Kirov ballet dancer!