A bit of trivia:

When "The Music Man" was originally being cast for Broadway, Gene Kelly, Ray Bolger and Danny Kaye all turned down the part of Professor Harold Hill before it was offered to Robert Preston - who took it, made it his own, performed it over 800 times and won a Tony.

When they were going to make it into a movie, they wanted a big star such as Frank Sinatra or Cary Grant - who, however (and to his credit), turned it down, saying, "Not only will I not play it, but if Robert Preston doesn't do it, I won't even see the picture" (I love that quote!).  The play's author, Meredith Willson, insisted on having Preston reprise the role, and it was a hit again (Trivia thanks to Turner Classic Movies). 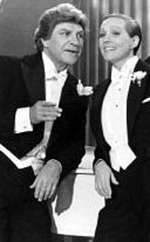 Here's my other favorite Robert Preston role - "Toddy" in "Victor/Victoria" (with Julie Andrews).